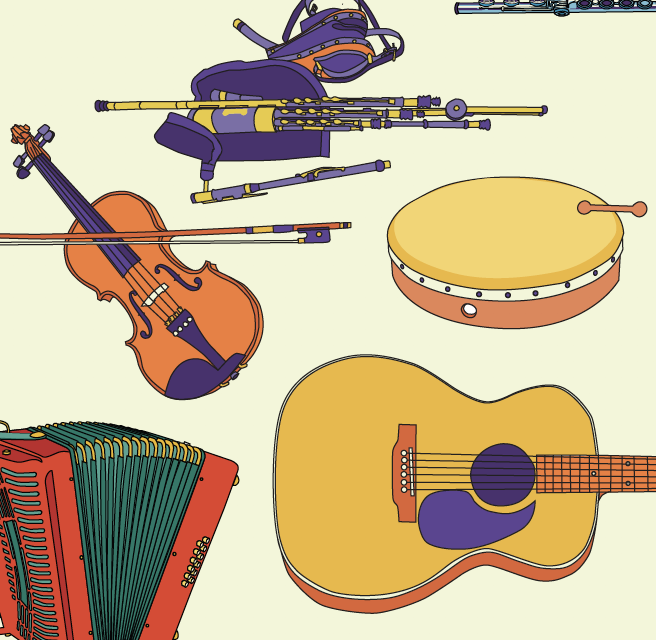 As we approach Seachtain Na Gaeilge for this year, we thought we’d put together a comprehensive list of Irish music terms so that you can brush up on your definitions to become the skilled session speaker you were born to be!

To help, we’ve split the glossary into 3 different sections:

Banjo (Bainseo) - the Irish banjo or the tenor banjo is a string instrument with 4 strings. It makes a distinctive twanging sound and is usually used for playing melodies.

Bouzouki - the Irish Bouzouki is an adaption from the Greek Bouzouki. It’s a string instrument that looks like a slightly warped guitar. It’s used for both playing melodies and for accompanying. Each note is doubled with 2 strings which sit closely together. While there is a metallic sharpness to the bouzouki’s sound it is still more mellow than that of the banjo. Here’s Donal Lunney demonstrating the full capabilities of the instrument:

Bodhrán - an Irish drum that sits on a players knee and is struck with a single beater. While it typically makes a low rumbling sound, the pitch can be changed by the player pressing their other hand into the skin of the drum therefore tightening it and making it a higher pitch.

Button accordion (Bosca Ceoil) - this is an accordion with buttons which are pressed to produce different notes. This is as opposed to a piano keyboard that you’d find on a piano accordion. Like all types of accordions they have 3 main features: the bellows (which pump the air), the reeds (which make the sound from the air) and the buttons (which change the notes).

Concertina - the concertina looks like a smaller button accordion. Like it’s bigger brother it still works by funnelling air from the bellows to create the notes. It’s sound is quite high pitched yet it still maintains a beautifully soft tone. Here’s Cormac Begley playing the concertina:

Fiddle (Fidil) - a fiddle is simply a more colloquial term for a violin. It doesn’t matter if it’s used in an orchestra or in a trad session, it’s still 4 strings on a wooden box played with a bow. Here’s Zoe Conway demonstrating the Irish fiddle:

Flute - the Irish flute is a wooden flute similar to what would have been used by classical flautists in the 19th century. It is played by blowing air through the mouth piece and then covering different holes with your fingers to change notes. Here’s master flautist Matt Molloy playing in Matt Molloy’s pub:

Guitar - the guitar was not traditionally played in Irish music but has since become more widely used in sessions. It is most typically used as an accompanying instrument to the melody instruments. Often times the tuning will be changed to be a more open sounding chord with less harmonies in it so that it doesn’t detract from the melody to which it is accompanying. Here’s Dennis Cahill playing with Martin Hayes:

Irish Harp (Cláirseach) - fun fact, Ireland is the only country in the world to have a musical instrument as its national emblem and that instrument is, of course, the harp. The Irish harp has a series of gut strings held at different lengths which are plucked but the player to sound the individual notes. The most famous composer and performer of the harp was Turlough O’Carolan from the 17th century. Here is one of his pieces:

Low Whistle - the older sibling of the tin whistle and also called the concert whistle, the low whistle is distinguishable by its lower tone. It’s in fact pitched one octave lower than a standard D tin whistle.

Mandolin - the mandolin’s origins date back to the lute family. Similar to the bouzouki, the instrument has four sets of double strings. The body, which is made from wood, fits snuggly in the player's arms and is smaller than a guitar or a bouzouki. It typically plays melodies at sessions as is expertly demonstrated here:

Piano Accordion - the other member of the accordion family common to Irish music sessions. This instrument has approximately a 3 octave keyboard on one side and then a row of small buttons on the other side. Those latter buttons allow performers to accompany themselves as they play the melody on the piano keyboard with their other hand.

Tin Whistle (feadóg stáin) - the tin whistle is a simple woodwind instrument with 6 holes. It’s also known as the penny whistle because you could buy one for a penny back in the 19th century. To this day, it remains a great instrument for beginners to learn starting off. Here’s one of the finest tin whistle players ever, Mary Bergin:

Uilleann Pipes (Píb Uilleann) - the uilleann pipes are a small type of bagpipe. They work by pumping air from a bag through reeds which then produce sound. Different notes can then be played by changing the amount of holes covered on the chanter (similar to the way a flute or tin whistle works). Uilleann in Irish means elbow which explains the use of the elbow needed to pump the bag in order to play the instrument. Here’s master piper, the late great Liam O’Flynn: 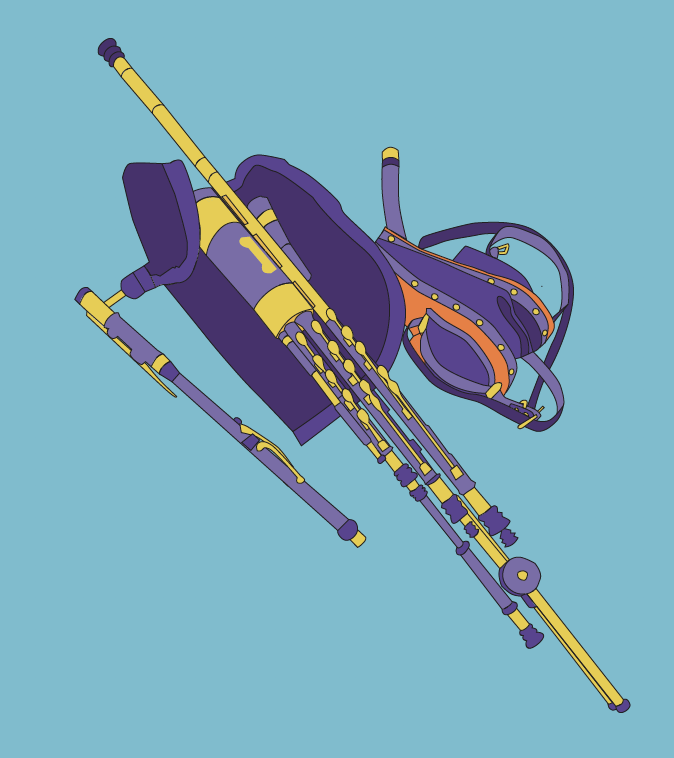 Barn dances - Barn dances became popular in the middle of the 20th century. They have a 4/4 time signature and have even more pronounced rhythm than hornpipes. They are often associated with the music you’d hear at a céilí.

Hornpipes - a hornpipe is a dance in 4/4 time. Typically they are played a bit slower than jigs and reels. I saw a good quote which said, ‘if jigs skip and lift and reels drive, hornpipes swagger.’ Often it’s the syncopation of notes that give it that bouncy swagger.

Jig - the jig is a lively dance which is perhaps the most common type of tune at a session. Jigs are in compound time which is why it has a swinging triplet feel to the tunes. An easy way to identify a jig is whether you can say ‘rashers and sausages’ over the rhythm of the tune. The most common time jigs are in 2 time.

Marches - a march is in 2 time and sounds like a tune you’d want to march to. The names of many of the marches in the Irish traditional repertoire make reference to particular political figures or events. Examples include: 'The Battle of Aughrim' and 'The March of the King of Laois'.

Mazurkas - Mazurkas are a dance which originated in Poland and which became a couple’s dance popular in the mid 19th century. It is most popular in Donegal and is recognisable as it typically has an accent on the 2nd beat of each bar.

Polka - Polkas are again a common dance which originated in what is now the Czech Republic. It is most popular in Cork and Kerry and often favoured by accordion players. An easy way to identify them is by singing 1,2,3 hop along to the tune.

Reel - a dance song played in 4/4 time with a driving tempo. It can be identified by its rhythm mirroring the words ‘Black and decker’. Try saying it over the top of this tune:

Sean Nos - this is a traditional singing style, which is almost always performed unaccompanied, where the melody shifts among various keys. It translates literally as "old style."

Slides - slides are often confused as simple jigs. The difference is they are in 4 time rather than 2. The reason for this is because the melody is phrased in 4 beats as opposed to 2 beats. You can, however, still say ‘rashers and sausages’ over the tunes. They are usually faster than single jigs.

Slip Jig - this is a jig played in 3 time so the timing feels longer than a simple jig.

Waltzes - an Irish waltz is a slower dance in three time. It's often danced with a partner.

Check out our blog on how to spot the difference between different Irish tunes:

Spotting The Difference Between Irish Tunes

Céilí - an evening of Irish dancing

Comhaltas - a gathering or group of musicians

If you're looking for more resources during for this year's Seachtain na Gaelige, why not sign-up to our course. We have some easy Irish songs for the classroom along with a downloadable worksheets resource on Irish instruments which you can do with your class: