5 Steps for Mastering Musical Techniques in the Classroom 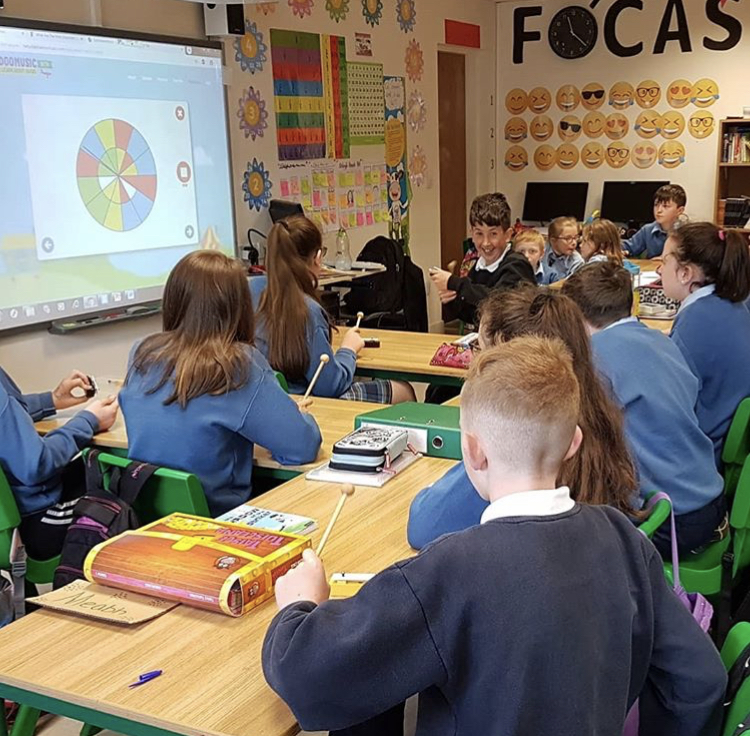 I remember when I was learning trombone as a child, each summer term would roll around and that would mean working towards a new grade exam. Learning the 3 new pieces for the exam was always enjoyable but it was learning the scales that was such a laborious process but, like eating your greens, I was told it was good for me.

I still play trombone in a number of groups and ensembles and when I look back on those days, I can safely say that practicing scales has been the most beneficial thing for furthering my continued enjoyment of playing the instrument. At the time I didn’t realise it, but my trombone teacher clearly did, and that’s why we repeated it over and over again.

In our work with schools we sometimes get asked about the repeated use of our interactive resources year on year. Our response is that this is by design because we believe, just like my scales, it is hugely valuable for children to continually go over certain musical concepts.

The key elements we recommend to schools, parents and children to practice as part of their classroom music subject are as follows:

These are all covered within the three core strands of the Irish primary music curriculum which are:

We understand that children may express reluctance to repeat activities but, as their teacher, we recommend that you insist on it so that it will benefit their learning long term. To help with this, here are our 5 steps for helping your class to master these core musical techniques:

1.) Give a Demonstration so the Children Practice in the Correct Way

Simply put, the more practice a child puts into going over a particular musical technique the more confident they will become with it. I’d compare it to learning your times tables or going back over grammatical rules that children are used to repeatedly practicing in other subjects.

The key, of course, is that perfect practice makes perfect therefore it’s important to provide instruction and, if possible, a demonstration as to how best to perform a particular activity.

An easy example of this is listening to a recording of a song before you get the class to sing it. This could mean finding a video on YouTube or a link on Spotify. The benefit of listening to a piece before you go to perform it, is so that it helps the class get the melody and rhythm into their heads.

A further example is if you were doing a rhythmic exercise where you are splitting the class into different groups and each group has a contrasting rhythm. For this, I’d recommend practicing each groups' rhythm in isolation before you put it all together.

2.) Repeat Things Over and Over

Once the class have listened to what something should sound like and have tried it initially through once or twice, the next step is to repeat the practice on a loop.

The idea is to build to a stage of automaticity where the activity becomes ingrained. Sometimes the temptation is to stop after a few times of competencies but it’s important to repeat beyond this. The reason for this is that the brain strengthens and consolidates information with myelin - a substance that forms over a neuron to embed the technique to memory. The more the myelin has formed over the neuron, the easier the child will find it to recall that technique in the future.

We’d recommend picking a number of times to repeat an exercise and telling the class so that they know what to aim for. Generally, the recommendation is to repeat an activity a minimum of 6 times (particularly for younger children) but you may want to aim for 10 times and then depending on the nature and length of the activity you can increase or decrease that.

Here’s an example of an approach to learning the song 'Jingle Bell Rock' by building up each line into the completed verse:

3.) Expand the Exercise once the Initial Technique is Practiced

Once the technique has been practiced multiple times, you can then look to add layers to the way the class performs it. Different ways you can do this include: varying the dynamics, changing the speed, adding movement to a performance or introducing elements such as backing tracks or different instruments.

An example of how we do this through our own interactive resources is in our clock resource. This resource (see below) allows children to follow a clock hand as it rotates around the circle. As the hand passes over their group’s colour, they play their instruments or make the sound they’ve been instructed to make.

As you can see from the image, there’s an outside circle and an inside circle. For the first time around, we’d typically ask the children to play it normally and as the hand passes over their colour, they play their instrument. The next time around we’d add another layer of complexity by telling them if their colour is on the inside circle we want them to play quietly and if they’re on the outside we want them to play loudly. 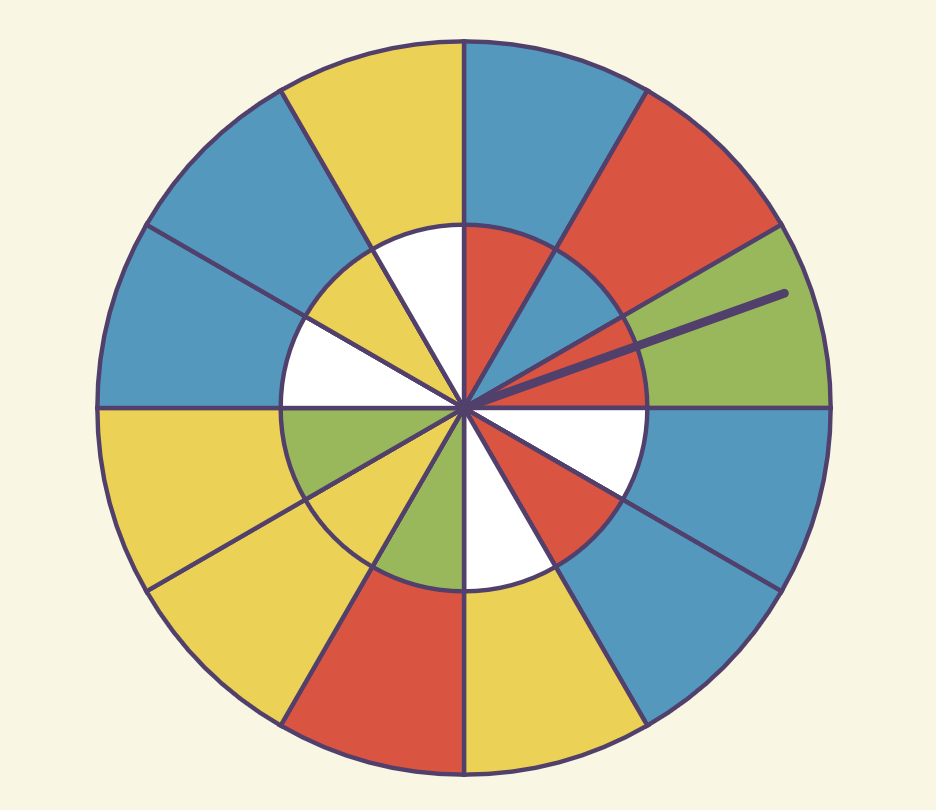 By having this level of progression within your musical activities, it will further embed your class’ understanding of the musical concepts you’re teaching them.

As someone who plays music, I find myself that it’s always beneficial to go back over particular musical exercises and techniques. While I am no longer practicing for grade exams or for school concerts, when I play with a band or am rehearsing for a gig, I find myself constantly resorting back to the exercises I learnt in lessons from when I was a child. For example, there are warm-up exercises I do every time I go to play my trombone that I learned when I was 11.

The reason I do this is because the musical concepts I’ve learned early in life remain the same with whatever music I’m playing. This is why it is so imperative to repeat musical exercises in the classroom year after year. It helps reinforce previously learned techniques and allows for further expansion of these concepts.

This applies, for example, when it comes to song singing. There is value in going back over songs covered in previous years. While firstly it’s enjoyable to sing back through songs they’re confident with, it is also an opportunity for them to improve their performance of the song. For instance, after an initial run through, you may want to try to increase the speed, change the dynamics or even add harmony lines for some of the older classes.

While children may react negatively to the idea of repeating an activity or singing a song they have previously sung, just know that the repetition of this same material year on year is going to continually help them to embed the musical principles that they previously learned. Also, feel free to get creative and explore ways to vary the activity as discussed previously. 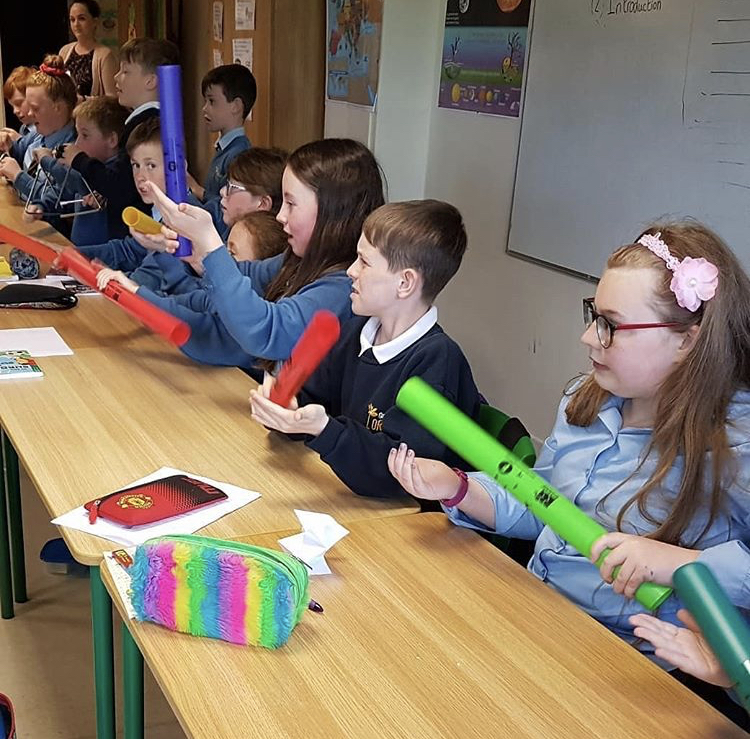 Once you’re at a stage where the class are comfortable with a particular technique, finding other real examples where they can try it out can be helpful.

For example, if you were singing the song ‘Somewhere Over the Rainbow’ the first two notes of the melody are an octave jump. By practicing these first two notes over and over it is a great way for a class to develop their confidence with singing an octave.

If the class was then to sing ‘When you wish upon a star’ or ‘Chestnuts roasting on an open fire’ both of those melodies start with an octave leap. By having previously practiced singing an octave in a melody, it will make the performance of it in another piece all the more simple.

This preparedness doesn’t just apply to singing intervals. The same approach to repetition will help when applied to practicing particular rhythms, tempos and even stylistic traits of particular genres of music. 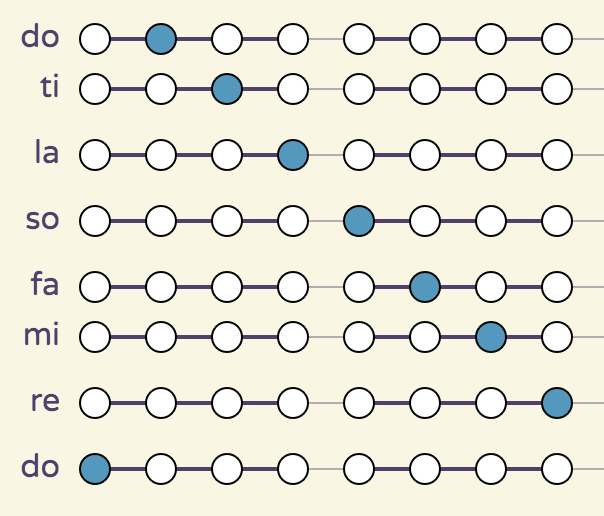 To conclude, whatever music activities you're learning in the classroom, build the mindset for yourself and your class that repetition and practice is important for embedding musical principles. In doing so you will help the children develop confidence in these techniques that will help them greatly in all of their future musical endeavours.

If you'd like to have more child-friendly folk songs to sing in the classroom, why not sign-up to our folk songs for children course. Click here to find out more: