Your Guide to Identifying The Instruments of the Orchestra 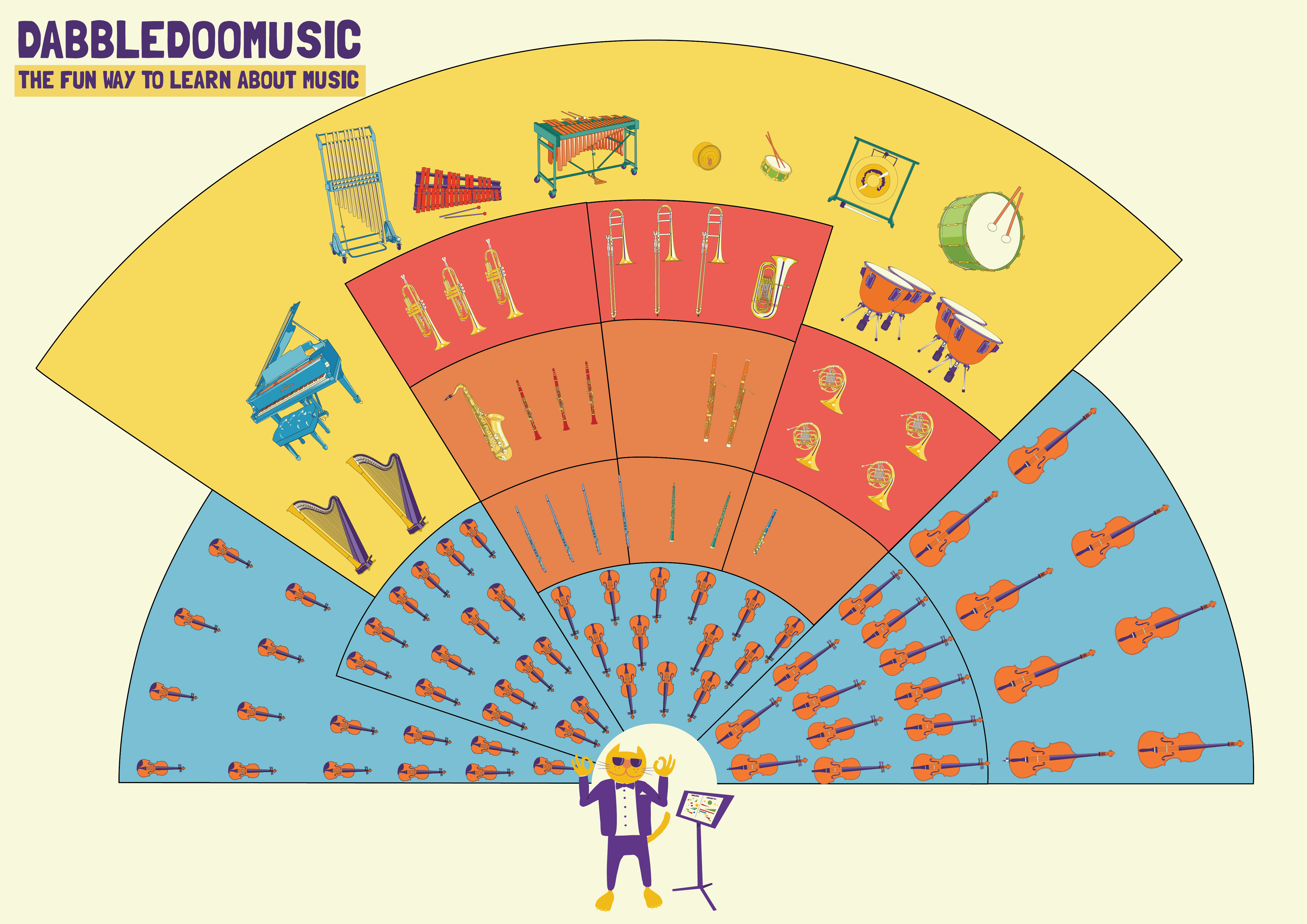 An orchestra is a large group of people playing lots of different instruments together. The modern orchestra, as we know it today, developed it's basic form in the early 1600's. Since then it has grown in size to some orchestras performing with over 100 players. It has also added and removed certain instruments over the year.

The modern orchestra is broken in to 4 main sections:

The names of each section are fairly self explanatory. For example, the string section are called as such because the players either bow or pluck metal strings to create the sound.

Within each section of the orchestra, there are multiple different types of instruments and so telling the difference between the sounds of them can be tricky.

To help with this, we've created this short guide to break down the most common instruments and provide a little description of their sound.

We've also included recordings of orchestral excerpts which feature each instrument so you can hear what they sound like.

If you're a primary school teachers, there are lots of the listening examples on Irish Primary Music Curriculum which feature an orchestra and so this guide will hopefully help you and your students feel more confident with identifying which instruments are playing in a particular piece.

We've also released a new brass instrument resource with printable posters and worksheets which you can download through the link at the bottom of the article.

The violin is leader of the orchestra and often times will carry the melody. You'll recognise it's sound by being the highest sounding instrument in the string section. It can hold both a rich and full sound as well as a light bouncy timbre such as in Vivaldi's Spring from the Four Seasons.

The voila sits right in the middle of the string section and tends to provide important harmony lines underneath the top violin parts. I'd class its sound somewhere in between a violin and a cello. It's not as mellow as a cello but it's not as thin as a violin.

Cello? Is it me you're looking for? The cello is one of the richest most beautiful sounding instruments. It has a deep resonant tone which is often called upon to carry the melody within the orchestra. Check out some Yo-Yo Ma - he's a boss at it.

The double bass is the lowest sounding instrument in the string section. It's usually tasked with providing the foundation for the rest of the orchestra to play their melody and harmony lines above. When it plays a melody itself, the sound is often a delightfully gruff bassy tone but it can also carry a lovely smooth quality.

The flute and it's smaller friend, the piccolo, tend to be the highest sounding instruments of the woodwind section. There is an airy quality to the sound of the flute perfect for fast sequences of notes or for portraying our own Celtic mysticism.

The oboe is the instrument that tunes the orchestra for the reason that it is regarded as the purest of tones and a tone that tends to cut through the sound of the rest of an orchestra. The oboe can be described as a high pitch nasal tone - but I mean that in a nicer way than how it sounds. It's direct timbre is also not dissimilar to the impact of a trumpet's sound.

Now we're getting on to some creamy goodness. The clarinet is the sound personification of melted chocolate and is often used for rich melodies above a string section accompaniment. It can also have an incredibly playful quality no better displayed than the opening passage of George Gershwin's Rhapsody in Blue.

The bassoon is to the woodwind section what the double bass is to the string section. It too can contrast moments of gruff melodies with sections of subtlety and smoothness. For some King Cornetto bassoon action, check out the contra-bassoon. When it's played it looks like blowing into an industrial chimney.

The French horn has a stately presence which creates a strong sense of gravitas particularly when played as a section of 6 or 8 horns in an orchestra. It's sound would be perfect to introduce a foreign dignitary or, equally, to advertise an evil merchant bank. Listen to the start of start of Tchaikovsky's piano concerto no.1 and you'll see what I mean.

The trumpet is often used for making a bold statement whether that's an army's call into battle or a celebratory fanfare for a wedding. It has a more piercing sound than the French horn which can cut through the broad texture of an orchestra. It's also the highest sounding brass instrument so often carries a solo melody. Here's an example of that stately fanfare sound from Mussorgsky's 'Pictures at an Exhibition':

You'll recognise the trombone because it's the best sounding instrument in the orchestra!!! And ok, yes, I do play the trombone, but that doesn't mean I'm wrong. The trombone is a lower sounding and (some might say less arrogant) brass instrument than either the trumpet or French horn. It is said to have the widest dynamics range of any instrument in the orchestra and can also hold both a very direct sounding tone as well as a quiet solemn sound. Here's an example of a direct sounding trombone tone from the opening of Mozart's Tuba Mirum from his Requiem:

The tuba is the lowest sounding instrument of the brass section and often plays in tandem with the trombone section. The tuba has a wonderfully deep warm bass sound which provides a delicious cushion that other instruments to play their parts on top of. It's sound is probably most recognisable for it's 'oom-pah' basslines in marching band music or in Alpine cattle milking songs. Here's a solo piece for tuba written by Vaughan-Williams:

The timpani, also known as the kettle drums, are the large set of hemispherical drums which typically sit at the back of the orchestra. There are usually 2 to 4 drums which can all be tuned to different tones. The timpani has a large loud booming sound which is especially used for the big climax sections of a piece. Here's one of the most famous timpani lines from the music used in 2001 Space Odyssey:

The snare drum is a higher pitched drum which is used not only in an orchestra but also as part of a standard rock drum kit. The snare can be recognised as the stereotypical gameshow drum roll sound. It doesn't change tone and so is considered an untuned instrument. This means it's role in the orchestra is for providing rhythmic textures which is perhaps most famously heard in Ravel's Bolero:

The xylophone is an instrument with multiple wooden bars of different sizes which are struck by a mallet to produce sound. It's also typically the first word we all learn that begins with 'x'. The instrument isn't very resonant but creates a lovely "clicky" texture when it's playing a melody. A good example is in Fossils from Carnival of the Animals:

Cymbals sound like a big metal crash. Simple as that. You can hear them in the 20th Century Fox Fanfare:

Other slightly more obscure orchestral instruments which we didn't feature which you may like to look into include: glockenspiel, piano, harp, bass clarinet, contra bassoon, cor anglais, triangle, bass drum, tubular bells, gong.

If you're looking for more resources to teach about orchestral instruments in the classroom, you should download (for FREE) this resource pack for brass instruments.

We have created six versions of each featured instrument that are in the following order: 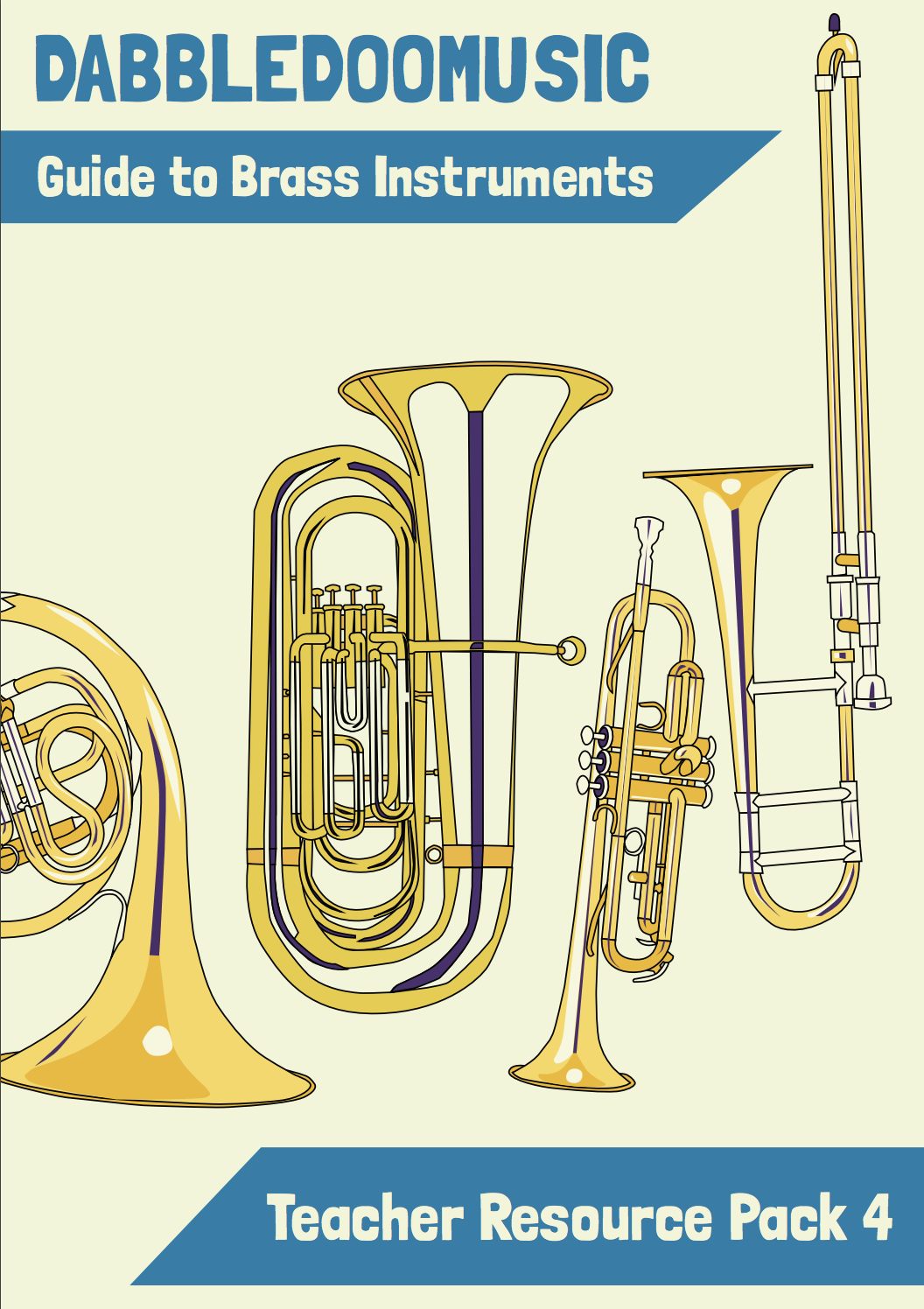